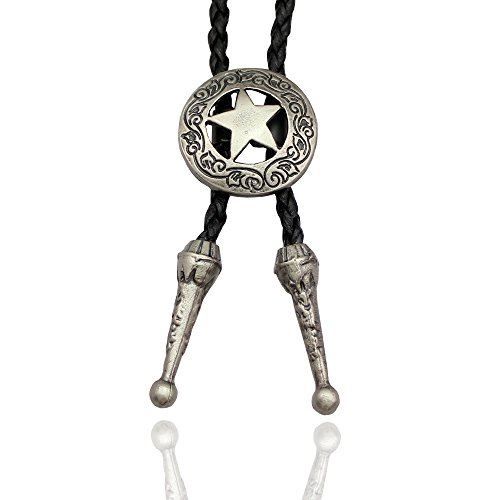 The measure proposing that the bolo tie by named the official tie of Texas, House Concurrent Resolution No. 12, was filed by State Representative Armando "Mando" Martinez on on November 11, 2006. Maritinez

WHEREAS, The State of Texas has customarily recognized a variety of official symbols as tangible representations of the state's culture and natural history; and

WHEREAS, The heritage of the Lone Star State is closely associated with images of cowboys and the western frontier, and these elements inform several of the current Texas symbols, including rodeo, the official state sport, and the longhorn, the state large mammal; and

WHEREAS, A singular fashion associated with the American West is the bolo tie, also known as the bola tie, which is distinguished by its decorative clasp that fastens a length of cord or string; a staple of the western-wear fashions sported by a large number of Texans, the bolo tie conjures up the romance of the pioneer era and speaks to the determination and independence that figure so prominently in Lone Star lore; and

WHEREAS, Patented in 1959 by an Arizona silversmith named Victor Cedarstaff, who was said to have gotten the inspiration for the design while on horseback, the bolo tie has been traced to older elements of ranching culture and the people of the western United States; the name derives from the bola or boleadora--a lariat with weights at the end that was used by South American cowboys to ensnare cattle; stylistically, it is similar to the string or plantation ties popular in the era when Texas was being settled, and it also resembles a type of tie worn by Native Americans in the early 1900s, which consisted of a bandanna or string fastened by a silver concho ornament; and

WHEREAS, The bolo tie remains popular among many American Indians, and intricate designs fashioned by Native American craftspeople using silver, turquoise, and other materials stand as some of the finest examples of bolo tie artistry; these factors make the neckwear a poignant testament to this region's original inhabitants and also to the many people of American Indian descent who are today Texas residents; and

WHEREAS, A fashion accessory that can be personalized to reflect the wearer's taste and interests, the bolo tie is well matched to the individualism that is so much a part of the Texan identity; in selecting or designing a clasp, bolo tie wearers are able to express their personal flair; moreover, the selection of a bolo over a standard tie can suggest that the wearer refuses to be bound by convention and relishes the freedom to exhibit a distinctive sense of style even as they maintain a dignified, formal appearance; and

WHEREAS, The bolo tie symbolizes both the state's iconic western culture and the originality of its residents, and it is indeed appropriate that this handsome and unique apparel receive special legislative recognition; now, therefore, be it

RESOLVED, That the 80th Legislature of the State of Texas hereby designate the bolo tie as the official State Tie of Texas.

The bolo tie was named the official state tie of Texas by House Concurrent Resolution and is not, therefore, listed in the Texas Statutes.

Only a small number of Texas' myriad symbols have been actually adopted by an act of the legislature and written into the Texas Statutes.

The History of Bolo Ties: Article by Nina Makofsky.

The Early Days of Bolo Ties: Article posted at SantaFe.Com.

This book tells the story of the development of the bolo tie while focusing on those made primarily by Native American artists. Bolo ties, representing the casualness and somewhat ruggedness of the West, emerged as a form of men's neckwear in the 1940s. They directly countered business suits, and the formality suits represented, and instead marked a different style and a different way of life. In particular, Native American jewelers and silversmiths brought individuality and creativity to this art form, offering a broad range of unique and artistic options.

The book shows the antecedents of the bolo tie including Victorian neckwear, scarf slides and string tie slides. The popularity of the bolo tie was increased through Western wear and through 1950s television shows and movies. Some TV and movie personalities who brought scarf slides and bolo ties into the everyday vernacular include the Cisco Kid, Hopalong Cassidy and Roy Rogers.

This is "Bola Bill" Kramer's story. He asserts that the first bolo tie was an accident that occurred in the 1940s when Arizona silversmith Victor E. Cedarstaff was chasing wild horses. Cedarstaff slipped his silver-edged hatband over his neck after it flew off his hat. Someone complimented the unintended accessory, so he went to his shop and forged the first official bolo.

Other sources say the tie was a natural evolution from the neckerchiefs of Argentine cowboys.

Still others believe its origins lie with Navajo, Hopi and Zuni men began who began using a shell or a silver conch to hold the ends of their bandannas together and to adjust the fit around their necks.


NETSTATE.COM is a Trademark of NSTATE, LLC.
Copyright © by NSTATE, LLC. All rights reserved.
No copyright is claimed on non-original or licensed material.
Support NETSTATE